Brown lamb shanks on the stove top in olive oil for 5 minutes.

Chop onion, carrots, celery and garlic in a food processor and add to pan with lamb shanks. Allow to cook for 20 minutes, turning the lamb shank over and stirring every 5 mins.

Next add wine, rosemary, thyme and bay leaf and allow to cook for another 5 minutes.

Chop onion and saute until translucent. Add carrots and celery and cook another 5 minutes.

Next, add 1 cup of red wine and stir. Once wine has cooked down add can of tomatoes. 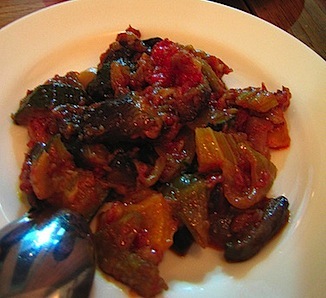 Preparation:
In a heavy skillet heat 2 tablespoons of the oil over moderately high heat until it hot but not smoking, in it cook the eggplant, stirring, for 3 to 5 minutes, or until it is tender, and transfer it to a bowl.

To the skillet add the remaining 2 tablespoons oil and in it cook the onion and the celery over moderate heat, stirring, for 5 minutes.

Add the olives, the capers, the vinegar, the sugar, the raisins, the pine nuts, and the tomatoes and cook the mixture, covered, stirring occasionally, for 5 to 10 minutes, or until it is cooked through and the celery is tender, and transfer it to the bowl.

Stir in the parsley, let the caponata cool, and chill it, covered,overnight. Season the caponata with salt and pepper. 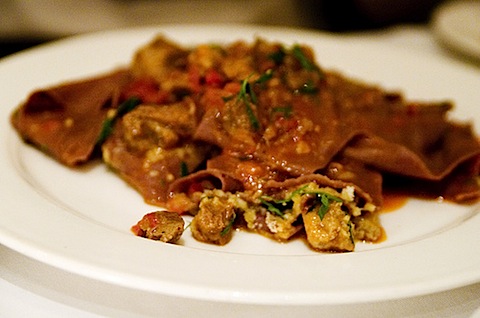 In a large cast-iron pot, sauté the onion in olive oil until translucent. Add the boar meat and brown. (That is, cook the meat over high heat, turning frequently, just until it’s cooked on the outside.)

Add the canned tomatoes, the bay leaves and the wine.

Simmer on low on the stovetop with the lid of the pot slightly ajar, and stir occasionally for at least two hours — or longer if possible. The longer you simmer this, the more tender the meat will become. The ragù is ready to eat when the meat has totally fallen apart and most of the liquid has been absorbed by the meat. Take out the cinnamon stick and bay leaves before serving.

Serve over the pasta and top with grated cheese. Accompany with some crusty peasant bread and a good red wine, preferably a strong Italian, like Amarone or Barolo.

from I Like Food, Food Tastes Good: In the Kitchen with Your Favorite Bands 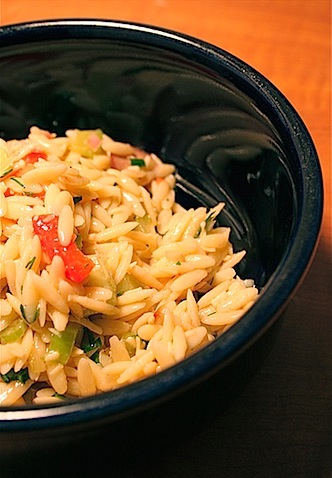 Pour the broth into a heavy large saucepan. Cover the pan and bring the broth to a boil over high heat. Stir in the orzo. Cover partially and cook until the orzo is tender but still firm to the bite, stirring frequently, about 7 minutes. Drain the orzo through a strainer. Transfer the orzo to a large wide bowl and toss until the orzo cools slightly. Set aside to cool completely.

Toss the orzo with the tomatoes, onion, basil, mint, and enough vinaigrette to coat. Season the salad, to taste, with salt and pepper, and serve at room temperature.

Mix the vinegar, lemon juice, honey, salt, and pepper in a blender. With the machine running, gradually blend in the oil. Season the vinaigrette, to taste, with more salt and pepper, if desired. 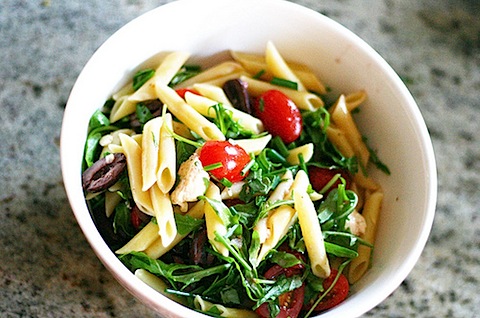